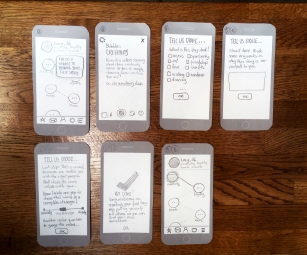 We started the sixth week of the project by designing low-fidelity prototypes to do some testing on the concept and flow. We divided the team members into pairs: one pair would work on two different flows for the assigning of value of the stories and another would do the same for the system of exchange. The reason for that was to test slightly different formats for the same flow and learn what works best and worse for each.

The test consisted in asking people to navigate through the paper prototypes as if they were using the app. Before, after and all throughout we asked them questions about their expectations (before we presented them the concept), perceptions (while navigating) and feelings (comparing their expectations at the beginning with the actual experience). Overall the concept was well received, with again the theme of personal security and the fear of “creeps” being the major concerns.  This was a very important part of the process, because watching people using our interface brought very insightful questions and concerns – both related to human behaviour and the interaction itself – we couldn’t have possibly considered.

After that, we’ve analysed the insights to combine the best features of each interface into one flow of wireframes, specifying the objective of each screen, the elements correspondent to each of these objects and the interactions.

After that, our next steps are to speak to Creative Technology Lab to evaluate feasibility of our imagined functions, refine the design and do a final user testing.