The last project of the term was “The UX of Death and Dying” The goal was to design an experience of a “good death”. First of all, what is a “good death”? Through the method of literature review, we were supposed to explore that topic for the first week.

To start with, we grouped up and brainstormed our ideas around the concept of death – individually and then collectively. The below image is a map of all our ideas put together. Instead of choosing one topic and exploring it thoroughly, we decided to choose one for each person to research individually. 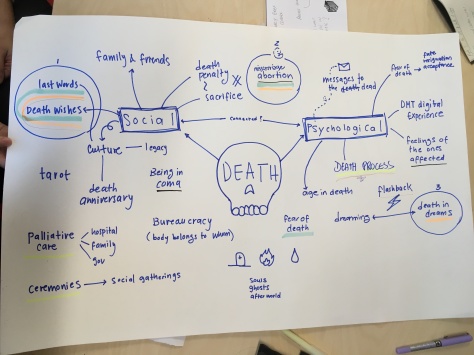 My topic was “Death and Dreams”, and for that I read mostly some chapters of works from and about Carl G. Jung. By the end of the week, we all met to stitch our findings together and design a presentation. Below are the images of our chosen format of presenting and all our references. 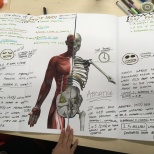 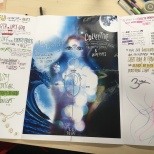 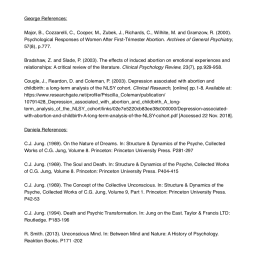 At first, because we chose to look into four different topics instead of pursuing one more deeply, it was difficult to see a direction for the design outcome. But after looking at all our findings we concluded that it was not possible to come with a definite concept of what is a good death. There are a few generic concepts, like a good death is pain free, for example. But, psychologically speaking, there’s no way to assume there is an ideal way to die. The consensus is that although we all know we’re going to die, no one really wants to (except when in extreme suffering). We conform to that idea only when faced with the imminence and unavoidance of death.

Neither of us had previous experience on that technology, so we turned up to the university’s Creative Technology Lab and ask for the help of the technicians. What we needed was a 360 degrees camera and to learn the basics of the software Unity.

At first we were warned by the difficulties of learning Unity, especially because it would require learning some coding, but we proceeded anyway. With the help of technicians Antoine and Delia, we were able to bring out idea to life in 4 days. The 360 camera was borrowed from the university’s Kit Room.

The Classroom
We used the classroom as one of our environments because it’s a place we can all relate to. It’s the context we’re all immersed in at this moment.
The Breathing Sounds
A reminder of one’s human condition.
The Door
A symbol of transition.
The White Room
Signifies a disruptive experience, therefore what happens in it is open to interpretation.

Before presenting it to the classroom, we had the time to test it with a few people around the university, without telling them about death or any other context. They all said that although being transported from the classroom to the white room was a bit of a shock, once in there it was a peaceful and pleasant experience, almost heavenly like.

Conclusion
Despite the abstractness of the topic, we managed to not only approach it in a simple way, but also to use it as an opportunity to learn a new technology. While designing our VR experience, we also learned from the technicians important theoretical aspects of it. For example, we learned that if the camera of the virtual environment moves without the user moving, it can cause motion sickness. For that and other technical reasons, we chose to keep our camera static. Overall we were happy with both the conceptual and final outcomes, because despite being a very rough digital prototype of an experience, it disclosed the concept in a simple enough way that could be appreciated by most who tried it.